The Bible talks about sobriety, intoxication and intentional harm to the body. Lives are filled with various forms of temptations.  In 1 Corinthians, we are warned temptations can or will overpower us, but we’re given resources to overcome temptations.

Its our forgiving Gods Words and Power of God that will win over our sin. Where people can find encouragement and strength to overcome these cravings. Drugs change the brain in ways that make quitting hard, even for those who want to.

Substance abuse can be one of the temptations that this verse can refer to. Drug and alcohol abuse is relatively common on this day. It’s difficult for many to bear but God provides a way out.

Addiction is a sin characterized by drug seeking and use that is compulsive, or difficult to control, despite harmful consequences.

The initial decision to take drugs is voluntary for most people, but repeated drug use can lead to brain changes that challenge a sin addicted person’s self-control and interfere with their ability to resist intense urges to take drugs.

But He has the only real solution to being free people in recovery from drug use are at increased risk for returning to drug use even after years of not taking the drug. Because of temptations and people that they would be around from there past usage or other reasons.

This brain destruction often leads to the person becoming less and less able to derive pleasure from other things they once enjoyed, like food, social activities, or other areas.

Do not get drunk on wine, which leads to debauchery. Instead, be filled with the Spirit. EPHESIANS 5:18

Likewise, teach the older women to be reverent in the way they live, not to be slanderers or addicted to much wine, but to teach what is good. Titus 2:3

These scriptures say that God hates sin and want us to not be led astray by these mind-altering substances.

Long-term use also causes changes in other brain chemical systems and circuits as well, affecting functions that include:

Despite being aware of these harmful outcomes, many people who use drugs continue to take them, which is the nature of sin > addiction.

Learn What Bible Says About Drunkards and Drunkenness:

Alcohol is one area of most abused drugs in the time period of the Bible as it was written and during those times and today as well. A lot of Bible verses refer to drunkenness and drinkers.

ROMANS 13:13 Let us behave decently, as in the daytime, not in carousing and drunkenness, not in sexual immorality and debauchery, not in dissension and jealousy.

1 CORINTHIANS 6:9-11 Or do you not know that wrongdoers will not inherit the kingdom of God? Do not be deceived: Neither the sexually immoral nor idolaters nor adulterers nor men who have sex with men nor thieves nor the greedy nor drunkards

nor slanderers nor swindlers will inherit the kingdom of God. And that is what some of you were. But you were washed, you were sanctified, you were justified in the name of the Lord Jesus Christ and by the Spirit of our God.

These scriptures say in interpretation that being addicted to a substance of alcohol is sin, but the sin is forgiven if you repent through Christ from alcoholism and other sins.

The verses also say being drunk is sin and you will not inherit the kingdom of God if you participate in those sins, and we should stop sinning (i.e., stop drinking or drugs), God can and will forgive you with proper repentance.

What Bible Says With Inebriation, Intoxication:

People say the Bibles condemnation abuse of alcohol is against all forms of abuse of these things. If the term drunkenness is interpreted as a general state of intoxication to any drug, then the Bible clearly admonishes drug use. 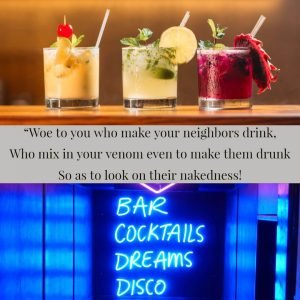 The Bible is not straightforward about drug abuse, but scriptures apply but are very clear about drinking.

The scripture wants us sober and not to be intoxicated because of sin. Research documents are that alcohol and drugs contribute to your not being self-controlled and increase rates of unsafe behaviors and violence. Many are sins and the scripture says to avoid what tempts us to disobey.

The bible verses are a warning to us against bad choices that will be sin. Addiction is sin and not a disease, which means it is a choice for people who are abusing, but it is hard to resist it.